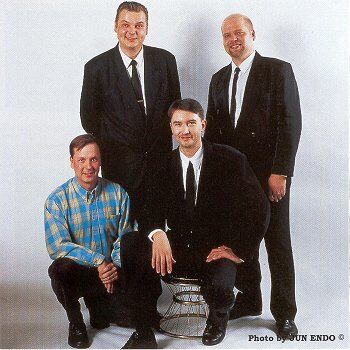 THE MUSTANGS, who originate from Orimattila, were formed from the remnants of THE SCAVENGERS in 1981, when it’s former members Jari Aaltonen – rhythm guitar; Markku Tuominen – bass and Jarmo Tuominen – drums, teamed up with new recruit Matti Luhtala on lead guitar. Matti Luhtala started to play guitar at the age of 14 and he was soon invited to play rhythm guitar in his first band called THE BAT. After a few years Luhtala met Jari Aaltonen in the band STINGRAY, which featured Jari on guitar and vocals. After some experience in a few other bands, 18-year-old Matti was invited to join THE SCAVENGERS just before the summer of 1981 as the former lead guitarist Ari Ovaska had left the group. Jari Aaltonen was also 14 when he received his first guitar. It would not take too long before the talented rhythm guitarist entered his first band. Before starting up THE SCAVENGERS, the Tuominen brothers had mainly been playing in various dance music line-ups, which usually were led by their father, who played accordion. On a few of those dance-music gigs during 1977-1979, Jari also joined them.

In the summer of 1981 the foursome of THE SCAVENGERS met 2 fantastic enthusiasts of instrumental guitar music an well-know record collectors, Olle Salo and Seppo Salminen. The owners of the instrumental label Rautalanka Records supported, encouraged and inspired the boys, and Seppo even allowed them to use his living room for rehearsals. Olle Salo – widely known as Mr. Rautalanka (Mr. Guitar Music) – was the one who eventually came up with the idea to change the name of the group to THE MUSTANGS. The band became more and more involved with the Rautalanka sound with the “big echo” and soon the first recording session took place at Studio Brushane in spring 1982, with production by Olle Salo and Seppo Salminen. Four tracks from this session, Lonely River / Magic Carpet / Ice Flowers / Evening Wind appeared on the first EP “Lonely River” (Rautalanka Rocrds RREP-1 / 1982). At that time, the repertoire of THE MUSTANGS was mainly based on old instrumental classics and Finnish traditionals moulded into twist and guitar instrumentals. Because of the great succes of their first EP, another three EP releases followed on Rautalanka Records: “Pistoleros” (RREP-2 / 1982), “Castle Mood” (RREP-3 / 1983) and “Siberia” (RREP-6 / 1984). Their first full-length LP, “The Mustangs”, appeared on LeBaron Music in 1983 (LBLP/MK 251) and proved to be a hit among instrumental record collectors, both in Finland as well as the rest of Europe. By the time the group released their second LP, “Must Twang” (Bluebird BBL/BBK 2507 / 1986), their popularity had grown remarkably. Around that time they had first Finnish TV appearance with “Cider Stomp”, a track taken from the MAXI-EP with the same title (Bluebird BBX-4 / 1986)

In spring 1988, the Tuominen brothers left THE MUSTANGS. Their repalcements were Timo Leinonen (drums) and Jari Vironen (bass). Sakari Korhonen, who had allready played with Matti in a couple of other bands in the early and mid 80’s, completed the renewed line-up. This five-men line-up recorded the third Mustangs album, “Twistside Story” (Bluebird BBL/BBK/BBCD 2526), which was characterised by vocals of Sakari Korhonen and Jari Vironen on a couple of tracks and intrumental compositions by Matti Luhtala. Some of these instrumental tracks can be found on the “Perestroka” collection, which was first released in Japan (Vavan Media VMCP-1016) in 1991 and later in Finland by Bluebird (BBCD 5010). This album contains fine examples of THE MUSTANGS’ music from 1982-1988. In addition to their instrumental material, the group have had very succesfulco-operation with Finnish frontline-vocalist Reijo Taipale. In 1989 the single “Virran Rannalla” went to the top of the Finnish chart and the album with the same title sold double platinum with more than 120.000 copies.

THE MUSTANGS’ fans had to wait until 1992 for a new fully instrumental Mustangs album, when “Going Doing” was released (Bluebird BBK 593/BBCD 5013). This appeared to be the last release with the five-man line-up, which had existed since 1988. Line-up changes took place in 1993 when Sakari Korhonen, Timo Leinonen and Matti Luhtala were replaced by Janne Orava (lead guitar) and Jarmo Peippo (drums). With the new line-up Aaltonen, Orava, Vivonen and Peippo, THE MUSTANGS released one 5-track CD, “Pro Vox” (MUST-003) in 1994 and did occasional gigs until the end of 1995. By that time, the growing popularity of Orava’s own band, THE REGENTS, did not leave him and Peippo (also member of The Regents), enough time to concentrate on both groups and therefor they decided to leave THE MUSTANGS. 1996 was a very quiet year for THE MUSTANGS, as Jari Aaltonen was also very busy with his succesful country & western group THE NIGHTRIDERS. Their CD was gaining lots of airplay both on Finnish and European radio stations.

Finally in January 1997 Jarmo Tuominen suggested a re-union for the original -81 line-up. During their absence from THE MUSTANGS between 1988-1996, the Tuominen brothers has kept their musical skills on a high level by contributing to many interesting projects like THE CHARADES, THE CREEPERS (Markku) and THE SHANONS (Makkru and Jarmo). Matti Luhtala also had some co-operation with Jarmo and Markku during 94-95 with a short-lived instrumental group THE SCARS. At present THE MUSTANGS are powerfully back again. They have been asked to do regular gigs at several clubs, restaurants and festivals and also to make their own recordings in various locations, mostly in the SingSong Studio. Four tracks from session in this studio can be heard on the compilation “Exotic Entertainment and Scary Sounds vol. 2” (Texicalli Records TEXCD 013 / 1998). In order to keep the sound of their music original, THE MUSTANGS always rely on the legendary sixties tape echo and tube amplifier sound. All tracks they produce are recreated faithfully with an up-to-date sound and production by a group which not only have a love for the type of music but also a genuine feel for it.

Some of the above information has been taken from an interview with Jean Bachelerie (Guitar & Drums) and own interviews with Matti Luhtala and Jari Aaltonen.