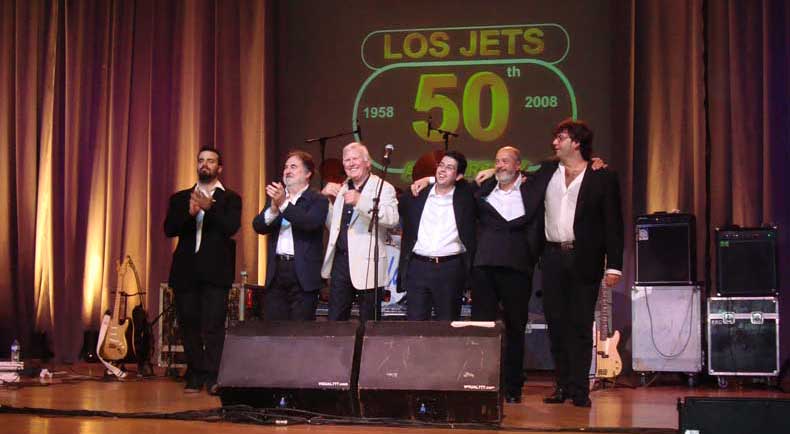 In 1958 the brothers Jose María and Santiago Gonzalez were performing as a duo under the name of Los Magicos. Whilst playing in a big Madrid dancehall that year, their paths crossed with lead guitarist Tony Reinoso and drummer/singer Ediberto Guzman. Just 24 hours later this quarter performed a show at The Studio club in Madrid to a tremendous response and one of Spain´s top rock groups was established. They decided that it they were to keep on playing together a better and more powerful group name was required, and so LOS 4 JETS was   born out of the member´s initials .

Jose played bass, Ediberto sang and played drums, Tony played lead guitar and Santiago was on rhythm. Following the success of the band in clubs like “Alex” and “Castello”, thay were signed to a recording contract with Polydor Records. By this time Tony had been replaced by Ricky Morales, brother of Junior Morales and founder member of Los Brincos. Junior was later to take his brother´s place when he in turn left Los 4 Jets.

Jose played bass, Ediberto sang and played drums, Tony played lead guitar and Santiago was on rhythm. Following the success of the band in clubs like “Alex” and “Castello”, thay were signed to a recording contract with Polydor Records. By this time Tony had been replaced by Ricky Morales, brother of Junior Morales and founder member of Los Brincos. Junior was later to take his brother´s place when he in turn left Los 4 Jets. WithTony departure thier names no longer matched the name of the group, but their years at Polydor were hihgly sucessful. They released four E.P.´s witn no less than three of the tracks reaching Number 1 on the Spanish hit parade: Zorongo Gitano (later recorded by los Benposta ca.1964) Guitarra Enamorada and Serenata Guzazteca.These three songs were popular favourites over a four year period, making Los 4 Jets the top Spanish band of the day with their hits, tours and TV appearances. Their records were released in countries outside of Spain. mainly in South America, and the band themselves played in France, including Le Perroquette Cabaret in la Place Belcour, Lyon.

Guitarra Enamorada was a version of The Fentones´ Lover´s Guitar, but was not a cover of The Fentones´ original. The number was submitted to the gruop by Polydor´s A&R man Rafael Neiderleinder along with many other songs for Los Jets´ consideration .However, it was the version by Frech gruop Les Fantones that they heard. Guitarra Enamorada went on to become Los Jets´ third chat-topper in Spain

The gruop were mainly influenced by Elvis Presly and Cliff Richard & The Shadows, and on stage they featured Shadows and Elvis numbers alongside their own recorded repertoire. In the beginning they played Spanish electric guitars like Custom and Super Custom with Roselson amplifiers and a small echo unit. With sucess came the money to buy three Fender amplifiers, a Fender Jazz Bass, a Gibson Les Paul ans Burns guitars, a Binson echo unit and Premier drums. During the sixties they mostly played Fender guitars throught Fender and Vox amplifiers, but used a lot of different echo unit. For drums it was mainly Premier or Ludwing.

The group´s contract with Polydor ended in 1964 when they decided to disband. heThis followed due internal differences and the new musical influences, which were causing so many groups around the world to face a change of direction… or extinction. They had been pretty much ahead of their time in Spain because few groups recorded at all until 1963-64, by which Los 4 Jets were calling it day – for while at least. With the increasing interest in nostalgia, in 1969 Polydor capitalized on the earlier sucess of the band by releasing a LP under the litle of Los 4 Jets. This comprised material that they had recorded for the company in the previous decade.

Until 1981 no-one heard any more about “LOS 4 JETS”, they lived only in the memory of their Spanish fans. However, in this year Los 4 Jets returned for a Christmas show on December 22nd, a charity event promoted by the Spanish petrol company CAMPSA. Appearing 20 years after their formation, the members´ names once again reflected the name of the group which was now known as simply by J.E.T.S.

Marfer Records released a live album of this reunion concert under the title J.E.T.S 20 AÑOS DESPUES” (J.E.T.S. 20 YEARS LATER”. Because of the great success of this concert the group decided to continue playing together. Tony Soler, who had previously played with Los Rangers, was replaced by Julian Sacristan on lead guitar a year later .

The band once again had tremendous success. This was due to their own reputantion and the input of two great new musicians. Julian Sacristan had played lead guitar with Los Flaps, Los Flecos, and Los Pekenikes. Eduardo Bartrina, who lists his influences as Louis Prima, The Shadows and Bill black´s Combo, was formerly drummer and founder member of Los Ranger. Los Rangers are regarded by Spanish musicologists as one of the most important “nusery bands”, three of their members now being amongst that country´s musical elite. The group disbanded again in 1983, this time due, amongst other things, to Eduardo Bartrina`s departure to the U.S.A. Thanks to moderm technology, however Eduardo continued producing and recording the band from New Jersey. In 1988 Eduardo returned to Spain and the group recorded the album, “VUELO RASANTE” for Iris Records. This is perhaps the best JETS CD to date and it returned them to the Spanish hit parade. Between 1988 and 1996 J.E.T.S. recorded seven CDs for Horus and H.M.R. records companies,mostly with Tony Soler on lead guitar, Jose as bass, Santiago on rhythm guitar and Eduardo as drummer. At the end of 1996 the group disbanded once more and Eduardo and Santiago recorded an album titled “J.Eduardo.T.Santiago mano a mano”. (J.Eduardo.T.Santiago.neck to neck). In 1997 the old manager of “Los 4 Jets” from their early days contacte Santiago about two big concerts in Alicante. Santiago and Eduardo tried to gather the band together once again,but this time it proved impossible. Only Julian Sacristan who played with Los Jets 1981, was available – but he brought with him Alberto Nuevo, former bass player of Los Flaps, and Julio Touza, 23 years old keyboard player, who would playing in a band for the first time. This line up recorded a great CD called Los Jets Are Back which topped the charts, their version of Ma Vie being nominated by the Djs of Radio Nacional de España ( Spanish National Radio) as the best version ever. For four years the band were at a peak , touring of the Spanihs concerts circuits and featuring in their own two hour TV special in 1998. Due to the success and the pressure of the last four years on the tours, Julian and Julio left the band, been replaced by Elena Senderos on the Keyboards and Rafael Laviada as Lead guitar. Alberto Nuevo left the group in December 2.001, taking his places as bass guitar player Antonio Reyes

In 2002 Michel Martinez takes the place of Rafael Laviada as lead guitarist and Elena Senderos is replaced by Javier Honrrubia on keyboards.

In September 2003 Antonio Reyes leaves the band and Paulino Gutierrez takes his places as Bass player.