Jens Varmlose was born in 1982 in Hjallerup in the north of Denmark. His music interest startet in 1986, believing that santa claus was sitting up on the roof he shouted up that his wish for christmas was a drumkit. What crazy parents would give a 4 year old boy a drumkit for christmas… well Jens’s did! He startet playing a bit without any teachers, his dad tought him a couble of usefull styles which Jens practiced day and night. 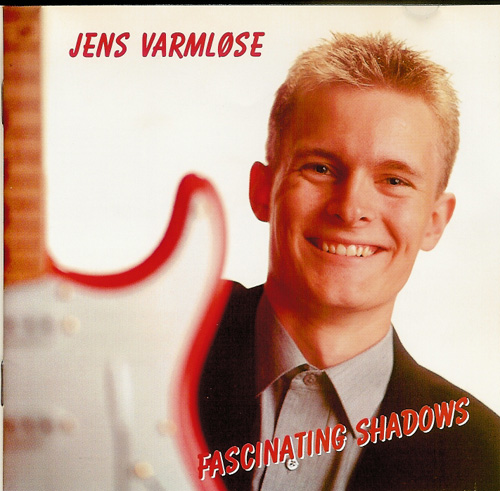 Later on it was almost the same story when he got a guitar for christmas 1989, he did’nt believe santa was still on the roof though! His dad had found a cheap secondhand Hagstrom electric guitar, which Jens still owns today. He soon learned a bit by himself without teachers, actually he did’nt have a teacher before he reached 17. He spent every day after school making noise in the house instead of doing all the homework. As time passed by he startet playing organ, piano and bass as well.

He startet playing with his dad and a couble of other guys whom his dad had played with in the early 70’s. Jens was played drums while the others was struggling with the chords in The Shadows music along with other 60-90’s popular music. On his 14th bithday he was given a Panflute, which he had to learn to play himself. It was impossible to find teachers in Denmark, but well, practice and you’ll get the hang of it sometime!

During the time Jens’s interest for The Shadows and Hank Marvin was still on a high level. He also startet collecting guitars, echoboxes and different vintage music stuff. In summer 2000 he went to The Shadows Festival in Norway where he met Bruce Welch, Alan Jones, Cliff Hall and Jet Harris. Late on the evening he actually was so lucky to jam with Alan at a rehearsal for the following days show. Ofcause he got some pictures with them, he did’nt imagine that he someday actually would be playing in a band with one of them, Alan Jones.

At about the same time he got in touch with some local friends. A dad and a son who also enjoyed the music of The Shadows. For fun they formed a Father/Son Shadows band called “The Old Young Ones” with Danny Franklin (lead) Morgens Franklin (rhythm) Bjarne Jensen (bas) and Jens on drums. (TOYO played at th 42nd meeting in Tilburg and will also be playing at the 43rd and The Shadows Music Convention in Verden, Germany in October 2003.

In 2001 Jens was invited to the 40th anniversary Cliff Richard and The Shadows Fan Meeting Holland in Tilburg. He was to play with Guitar Syndicate, Danny Davis & The Boys, The Reflections and Brian ‘Licorice’ Locking. It was a big thing for Jens, he also got a recording contract offered from Movi Music. Half year later the CD ‘Fascinating Shadows” was released at the 41st Shad Meeting. Jens played the top of the bill show in the end of the evening with Alan Jones, Brian Locking, Willy Dona and Danny Franklin. He also played at the 42nd Meeting, 43rd, 44rd and Shadows Convention in Verden, Germany 2001 and 2002.

Once more he’s back in Holland for the 45rd Meeting with his friends live on stage the 2rd and 3rd of April 2005.

Jens enjoy the meeting again 31 Martz – 1 April 2012 with a solo on his Acoustic guitar. Fantastic job en well done and here Stand by me.