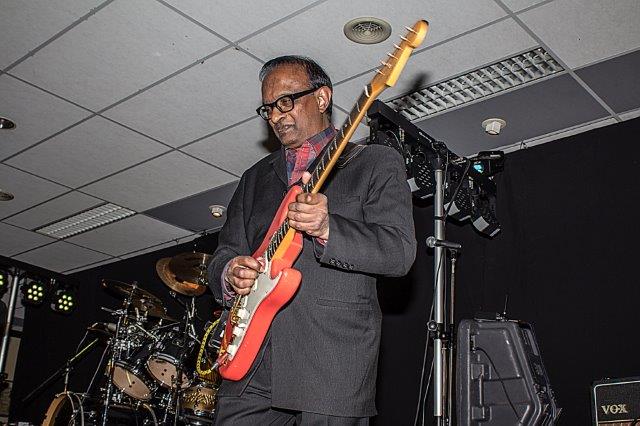 Indra Rajah, born in Sri Lanka, formerly known as Ceylon, started his musical career as the lead guitarist of the Band “THE JETLINERS”.

The “JETS”, as they are popularly called, were recording artists for EMI under the Columbia label in the mid sixties. (In 1999 the “JETS” reunited for the first time in 30 years for a successful tour of Sidney, Melbourne, Los Angeles and Toronto. In December 2004 they had three sell-out 1500 seat-concerts in Sri Lanka, this after 35 years after their last show there.

Indra first met the THE SHADOWS in 1969 at the EMI studio in Singapore. He left the JETLINERS in December 1969 and came to Europe with his own band Topaz. They performed as supporting acts for Gary Glitter and The Equals. Casey Jones (Don’t Ha Ha) sang with Indra and his band on Radio Bremen and other shows. Indra continued to play in the dance music-scene till the early eighties. He stopped playing for about four years and then decided to go back to his roots and play the music of THE SHADOWS with his new band “Park Avenue Connection”. Middle of 2004 the name was changed to “Indra and Move iT”.